Microsoft has announced that its Microsoft Malicious Software Removal Tool has recently been modified to detect two new malware families: Matsnu and Bafruz.

The latter one is a insidious and eminently efficient backdoor Trojan capable of performing a number of malicious actions and changes on the infected computer.

It performs the latter action by terminating a long list of security processes listed in its code, and by displaying a fake virus detection warning: 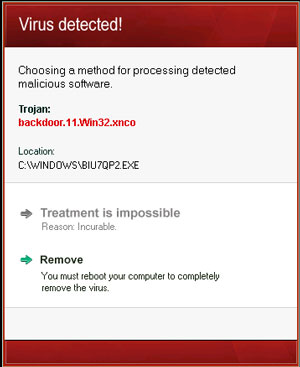 This is aimed at making the user reboot his computer in safe mode, so that the Trojan can remove components of the installed antivirus product from the system entirely.

Once that is effected, the user is presented with a message supposedly coming from the former resident AV solution saying that it now functions under enhanced protection mode.

“This may lead the user into believing all is well with their security product, while in the meantime, Bafruz is downloading additional components and malware onto the computer in the background through its P2P network,” Microsoft warns.