Windows 8 has not yet been released and cyber crooks are already taking advantage of its name. 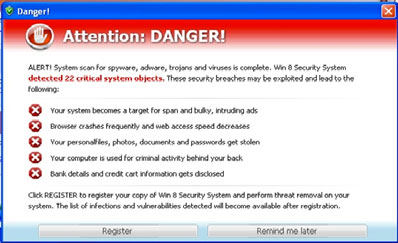 But even if the victims realize that the software in question is a fake and aimed only at bilking users of their hard-earned cash, they will have a tough time with removing it.

To protect itself, the malware comes with a rootkit and creates a bucketload of registry elements and values, as well as half a dozen files and one folder, making it almost impossible to manually remove as you can permanently damage your system if you make any mistakes in the process.

The researchers recommend manual removal only to experienced users such as IT specialists or highly qualified system administrators. Other users should use their regular desktop security software.