With findings based on self-reported experiences of more than 13,000 adults across 24 countries, the 2012 edition of the Norton Cybercrime Report calculates the direct costs associated with global consumer cybercrime at US $110 billion over the past twelve months. 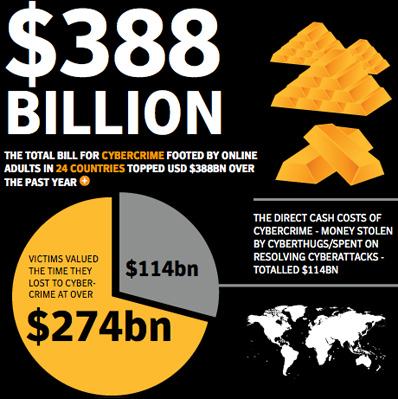 In the United States, it is estimated that more than 71 million people fell victim to cybercrime in the past twelve months, suffering $20.7 billion in direct financial losses.

Every second, 18 adults become a victim of cybercrime, resulting in more than one-and-a-half million cybercrime victims each day on a global level. With losses totaling an average of US $197 per victim across the world in direct financial costs, cybercrime costs consumers more than one week’s worth of nutritious food necessities for a family of four.

Compared to last year, the survey shows an increase in newer forms of cybercrime, such as those found on social networks or mobile devices – a sign that cybercriminals are starting to focus their efforts on these increasingly popular platforms. One in five online adults (21 percent) has been a victim of either social or mobile cybercrime, and 39 percent of social network users have been victims of social cybercrime.

Nearly one-third (31 percent) of mobile users received a text message from someone they didn’t know requesting that they click on an embedded link or dial an unknown number to retrieve a “voicemail”.

While 75 percent believe that cybercriminals are setting their sights on social networks, less than half (44 percent) actually use a security solution which protects them from social network threats and only 49 percent use the privacy settings to control what information they share, and with whom.

The 2012 Norton Cybercrime Report also reveals that most Internet users take the basic steps to protect themselves and their personal information – such as deleting suspicious emails and being careful with their personal details online. However, other core precautions are being ignored: 40 percent don’t use complex passwords or change their passwords frequently and more than a third do not check for the padlock symbol in the browser before entering sensitive personal information online, such as banking details.

In addition, this year’s report also indicates that many online adults are unaware as to how some of the most common forms of cybercrime have evolved over the years and thus have a difficult time recognizing how malware, such as viruses, act on their computer. In fact, 40 percent of adults do not know that malware can operate in a discrete fashion, making it hard to know if a computer has been compromised, and more than half (55 percent) are not certain that their computer is currently clean and free of viruses.

“Malware and viruses used to wreak obvious havoc on your computer,” Merritt continues. “You’d get a blue screen, or your computer would crash, alerting you to an infection. But cybercriminals’ methods have evolved; they want to avoid detection as long as possible. This year’s results show that nearly half of Internet users believe that unless their computer crashes or malfunctions, they’re not certain whether they’ve fallen victim to such an attack.”

More than a quarter (27 percent) of online adults report having been notified to change their password for a compromised email account. With people sending, receiving, and storing everything from personal photos (50 percent) to work-related correspondence and documents (42 percent) to bank statements (22 percent) and passwords for other online accounts (17 percent), those email accounts can be a potential gateway for criminals looking for personal and corporate information.

“Personal email accounts often contain the keys to your online kingdom. Not only can criminals gain access to everything in your inbox, they can also reset your passwords for any other online site you may use by clicking the ‘forgot your password’ link, intercepting those emails and effectively locking you out of your own accounts,” says Adam Palmer, Norton Lead Cybersecurity Advisor. “Protect your email accordingly by using complex passwords and changing them regularly.”