An advertising module embedded into over 7,000 “free” fake versions of legitimate Android apps that can be found on Google Play is actively harvesting a ton of personal and mobile use information from unsuspecting users, warns Trend Micro Senior Threat Researcher Alice Decker.

She detected one such app after downloading by mistake a fake Flash Player from Google’s official Android market and getting warned about its malicious nature by her company’s own mobile security app: 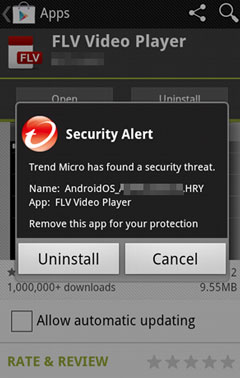 After having consulted with a colleague from the Mobile Application Reputation team, she discovered that the extent of the problem: apart from pushing ads onto the users, the adware module inside the app also sends information such as device ID, OS version, IP address and the user’s phone number, GPS location, account information, calendar and browser bookmarks to the servers of the company that created the module.

“Though most adware are designed to collect user information, a fine line exists between collecting data for simple advertising and violating one’s privacy,” Trend Micro researchers point out. “Because they normally collect user information for legitimate purposes, they can serve as an effective means to gather more data than some would want to give out.”

This particular ad module compromises the users’ privacy and their devices’ usability, and the extra bad news is that it has been found in over 7,000 free apps offered on Google Play.

“80% of them are still available, and at least 10% of them have been downloaded more than one million times,” Decker warns, and adds that the Web of Trust community believes that the company that created it is also involved in phishing and scamming users.

“Users should be careful about all mobile apps they download, wherever they come from. This is particularly true for ‘free’ apps, where in effect your information becomes payment for the app,” she points out. “For some people, this may be a worthwhile tradeoff – but this is something every user should decide for themselves, with a full appreciation of what is given up in return for something ‘free’.”