CitiBank customers are advised to tread carefully through their email inboxes as fake credit card statements sporting the bank’s name could be waiting for them: 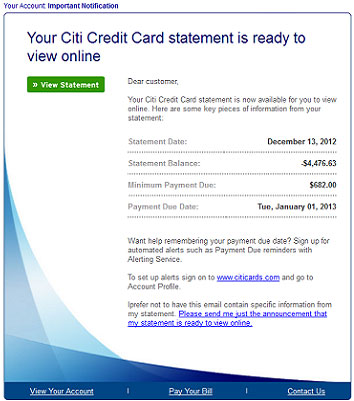 The emails contain “Your Citi Credit Card statement is ready to view online” in the subject line, and the attackers count on the large fake negative balance to make users follow the offered link, which will take them to a website hosting the Blackhole exploit kit.

“If the site is opened with Chrome, victims are presented with a page that urges them to download and install a malicious Chrome update. On the other hand, if the site is opened with other browsers, the user is almost immediately served a piece of malware via unpatched security holes in commonly utilized applications such as Java or Flash,” shared Eduard Kovacs, and pointed out that this “quirk” is probably due to the fact that the aforementioned exploit kit has a hard time of infecting Chrome users.

As other researchers have noted, Blackhole takes advantage of Java, Adobe Reader and browser vulnerabilities, but Chrome does not use Adobe Reader to open PDF files and asks users permission to run a Java applet before doing so, essentially limiting Blackhole’s effectiveness.