A signed but malicious applet that will apparently fool even the latest Java 6 update has been discovered on a German online dictionary website infected by the g01pack exploit kit, warns security researcher and Metasploit contributor Eric Romang.

The applet is signed with a stolen private key belonging to Texas-based Clearesult Consulting: 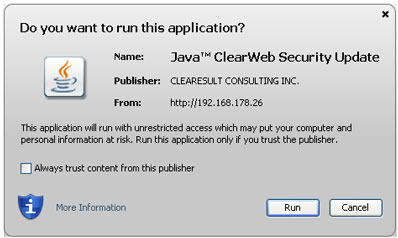 The certificate associated with the applet has been revoked late last year. Nevertheless, Java detects the applet as trusted and its default high security level doesn’t automatically block it from running.

Romang points out that signing and verifying files is a so important part of the Java platform’s security architecture that Jarsigner validates the file despite the certificate having been revoked.

Jindrich Kubec, Director of Threat Intelligence at Avast, discovered the reason: Java has the “Check certificates for revocation” option turned OFF, and the “Enable granting elevated access to selfsigned apps” feature turned ON by default.