As predicted, the death of such a well-known and controversial politician as the Venezuelan President Hugo Chavez has been exploited by cyber criminals to lead users to malware.

The email subject and body contain speculation about the true nature of Chavez’s death, and the text is peppered with links: 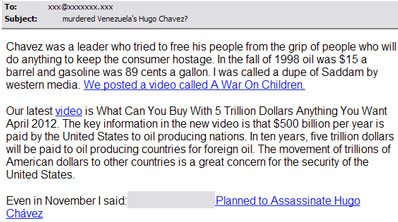 But, according to Symantec researchers, all the links lead to malware-laden domains that have been either recently registered or hijacked.

According to Kaspersky Lab expert Dmitry Bestuzhev, the websites on which the victims land are equipped with a “heavy obfuscated JS that after meeting the necessary parameters of the victim’s operating system executes the corresponding exploit.”

He also warns that the malicious spam campaign is still active, and is apparently based on version 2.0 of the BlackHole exploit kit.

Users are advised to remember that unsolicited emails containing breaking news with links or attachments are, in the overwhelming majority of cases, sent out by malicious individuals that bet on the recipients’ curiosity.