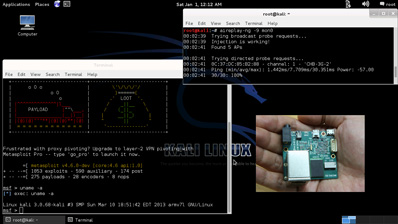 The new Kali Linux incorporates more than 300 penetration testing and security auditing programs with a Linux operating system, delivering an all-in-one solution that enables IT administrators and security professionals to test the effectiveness of risk mitigation strategies. Metasploit is the most comprehensive exploit solution included with the package and is featured as one of the Kali Linux’s “Top 10 Security Tools.”

“When it comes to security, the best defense is offense; you need to test the effectiveness of your own security practices before a real intruder does it for you,” said HD Moore, chief architect for Metasploit at Rapid7. “We built Metasploit to level the playing field for defenders; arming them with the same tools the attackers have. Offensive Security takes this even further, bringing hundreds of such tools together in Kali Linux to streamline security auditing.”

Responding to the strong community demand for Metasploit on BackTrack Linux, Rapid7 reengineered Metasploit in accordance with the Debian standards on which Kali Linux is built. Metasploit users now benefit from a more integrated and robust experience with the toolkit, as well as Rapid7 technical support for Metasploit Pro users.

Kali Linux makes BackTrack accessible to a broader audience of IT administrators and security generalists, and Metasploit Pro supports this with its user-friendly interface, reporting and automation capabilities.

“Metasploit has been one of the most important solutions for penetration testers on BackTrack,” said Mati Aharoni, lead trainer and developer at Offensive Security. “As we were looking to make Kali Linux a more robust security auditing toolkit, it was critical to get Rapid7 on board to package this important and powerful software. We’re very happy to see Rapid7 join us as an official Kali Linux contributor.”

Kali Linux is available for free download and is supported by all editions of Metasploit.