A new Coverity report details the analysis of more than 450 million lines of software code through the Coverity Scan service. The service, which began as the largest public-private sector research project focused on open source software integrity, was initiated between Coverity and the U.S. Department of Homeland Security in 2006 and is now managed by Coverity. 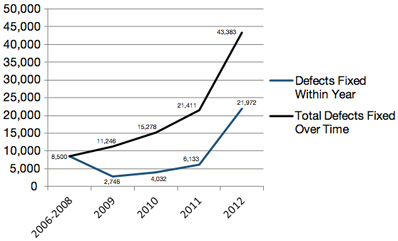 Over the past seven years, the Coverity Scan service has analyzed nearly 850 million lines of code from more than 300 open source projects including Linux, PHP and Apache.

Code quality for open source software continues to mirror that of proprietary software-and both continue to surpass the industry standard for software quality. Defect density (defects per 1,000 lines of software code) is a commonly used measurement for software quality. The analysis found an average defect density of .69 for open source software projects that leverage the Coverity Scan service, and an average defect density of .68 for proprietary code developed by Coverity enterprise customers.

Open source projects with between 500,000 – 1,000,000 lines of code, however, had an average defect density of .44, while that same figure increased to .75 for open source projects with more than one million lines of code, marking a decline in software quality as projects get larger. This discrepancy can be attributed to differing dynamics within open source and proprietary development teams, as well as the point at which these teams implement formalized development testing processes.

High-risk defects persist. 36 percent of the defects fixed by the 2012 Scan report were classified as “high-risk,” meaning that they could pose a considerable threat to overall software quality and security if undetected.

Resource leaks, memory corruption and illegal memory access, all of which are considered difficult to detect without automated code analysis, were the most common high-risk defects identified in the report.

“We started the Coverity Scan project seven years ago with the U.S. Department of Homeland Security, as a resource for the open source development community to improve the quality of their software,” said Andy Chou, co-founder and CTO for Coverity.

“Each year, driven in part by advances in static analysis technology, the size and scope of the report increases—as do the number of defects identified and fixed. We’re very proud to see how the Coverity Scan service has evolved to become a key indicator of code quality for both open source and proprietary software, and look forward to continuing this work in the years to come,” Chou added.