37.3 million users around the world were subjected to phishing attacks in the last year, which is a massive 87 percent increase for the number of targeted user in 2011-2012.

According to the results of a Kaspersky Lab research into the evolution of phishing attacks, they were most frequently launched from the U.S., the U.K., Germany, Russia and India. Most often targeting users are those in Russia, the U.S., India, Germany, Vietnam, the U.K., France, Italy, China and Ukraine, which represent 64 percent of all phishing attack victims within the observed period. 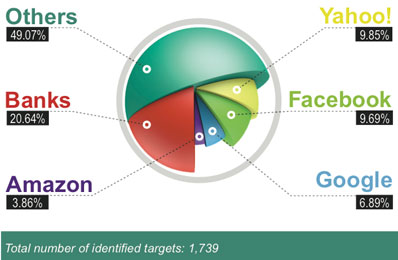 The number of fraudulent websites and servers used in attacks has more than tripled since 2012, and more than 50 percent of the total number of individual targets were fake copies of the websites of banks and other credit and financial organizations.

The Top 30 websites that are copied the most often by phishers are mostly services and companies whose names are known by a mass audience. The number of attacks against one or another online resource may correspond directly to its popularity.

Depending on the country, the list of the websites that are visited may change — this is typically influenced by local user preferences.

For example, in the U.S. the top three most targeted sites are Yahoo!, Facebook and Google. The list for Russia goes like this: Odnoklassniki.ru, VKontakte, and Google Search.

Internet users can encounter links to phishing sites either by surfing the web or via email, but according to the research, the overwhelming majority of phishing attacks are launched against users when they are surfing the web, and take the form of banners to legitimate websites, messages on forums and blogs, private messages on social networks.