Phishing attack frequency declined 20 percent from Q4 2012 to Q1 2013, due to a precipitous drop in virtual server phishing attacks. APWG statistics indicate that phishing levels are returning to the levels seen prior to the record-setting highs of 2012. 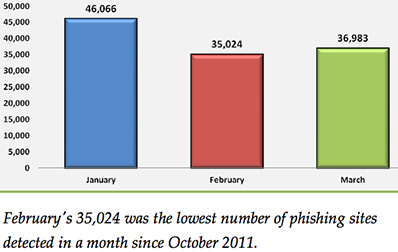 “The drastic decrease likely indicates that cybercriminals are utilizing the servers they compromise not for phishing attacks, but rather for more malware or distributed denial of service attacks,” said Rod Rasmussen, CTO of Internet Identity.

Another set of statistics also demonstrated criminals seeking out compromised servers they could use to distribute malware. During March, the percentage of phishing-based Trojans and downloader malware hosted in the USA dropped from 37 percent to less than 20 percent.

“While tracking the decrease in US-hosted phishing websites we noticed a corresponding increase in phishing sites hosted in Canada,” said Carl Leonard of Websense. “Canadian-hosted phishing decreased in 2012, so we may seeing the beginning of a trend reversal in Q1 2013.”

Trojans continue to account for about three-quarters of all newly detected crimeware threats.