Fujitsu has been creating and releasing palm vein biometric authentication and identification systems for over a decade, but have now presented a new one that definitely deserves some special attention. 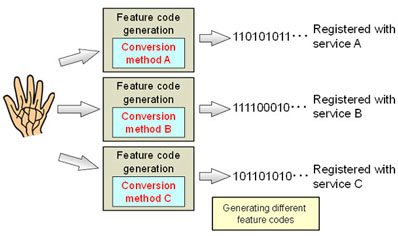 This new solution not only makes it so that multiple feature codes can be generated from a single piece of biometric data (one palm vein image) and so used for authentication to different services, but also allows new codes to be generated if the previous ones have been compromised.

“The technology segments the [palm vein] image into regions based on the volume of information in each part of the image, extracts feature components from the vein patterns in the regions, and then employs a data compression technology to extract a final feature code with 2,048 bits of data,” the company explains. “By adaptively segmenting the image into regions, it is possible to minimize the effects of minor changes to the position or shape of the hand. It also makes it difficult to reconstruct the original image from the extracted feature code.”

It’s also interesting to note that the biometric data is never sent from the biometric device to a server, and is, in fact, destroyed every time after the code is generated.

According to DigInfo TV, the accuracy of the solution is outstanding, and the probability of mistaking the user’s identity is about one in 100,000.

They also have a great video demonstration of how the system works:

The company plans to make the solution practical and available by 2015.