The cross-platform Frutas RAT is being used in a new email phishing campaign targeting high-profile finance, mining, and telecom companies as well as governments in Europe and Asia. 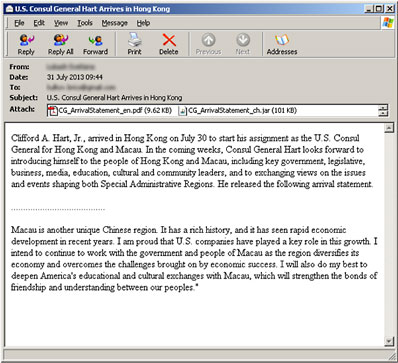 Of the two attachments included (often using the same file name), the PDF one is a decoy, while the malware resides in the second one – a JAR file.

This variant of the Frutas RAT is set to harvest information such as Mac and IP address, user name, country the computer is located in, OS information (name, version, architecture), and the Java Runtime version, and send it to a remote server

According to Symantec researchers, the RAT is probably used just for reconnaissance, so that the attackers know what kind of exploits and malware they can use in later targeted attacks.

Given the targets of this email campaign, it’s natural to assume that the attackers are motivated by things other than money, and are likely employed by a nation state. Still, it is interesting to note that even attackers such as these are not above using freely distributed malware if it gets the job done.