Two new iPhones have been announced. According to Apple’s presentation, the most common way to secure a device is with a passcode and about half of smartphone users do not use a passcode. That is a lot of unsecured information. The new iPhone 5S will now have a fingerprint reader built in to the Home Button at the bottom. 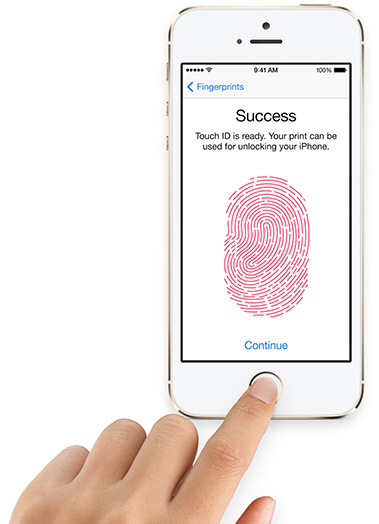 This new fingerprint reader will use what they call a Touch ID Sensor. It’s 170 microns thin, senses 500 ppi, and scans your sub-epidermal skin layers. It has the ability to also read the fingerprint in any orientation. This is different than most laptops with fingerprint readers where you must swipe your finger across a scanner in a specific direction.

This new reader will allow users to simply unlock their phone by just touching the home button. It will also allow for authentication within the phones other features and apps (like the iTunes store password). The reader has the ability to handle multiple fingerprints as well so you won’t be restricted to one person (or just one finger).

I see the major benefit of having this technology built in to the phones will hopefully be that more users will now secure their devices. Most people don’t seem to think about the information that is contained in their phones or the severity of having that information stolen. Most phones contain emails, personal contacts, and many apps that have synchronized passwords and other sensitive data.

By not having a password or some sort of protection on a device, you’re open to anyone getting their hands on all of that data if you were to lose your phone or have it stolen. This stolen data may not only be personal either, many people with business email on their phones may lose some important or proprietary information.

There have been numerous reports in the past of laptops and such being stolen out of peoples cars or phones snatched out of peoples hands on subways as the doors close. If you have no sort of authentication on your phone, all the data is there for anyone to access.

I see adding this feature as a good move on the security side of things and I hope more manufacturers consider adding security measures due to how popular mobile devices are. Fingerprint readers for the most part, are a secure method of authentication.

It’s not perfect (I recall a famous myth busting show demonstrating this) but this new technology will hopefully be an easy authentication step for users to take in securing their phones. Making security easier for users to live with will make them more likely to use the proper security measures in the long run.