Microsoft has released the results of a global survey that tried to answer the question how people around the world see technology and how personal technology has changed their lives.

While there are differing viewpoints between the developed and developing world, the overwhelming majority of the more than 10,000 people surveyed from 10 nations said they embrace personal technology, particularly in emerging markets, and see it as the foundation of innovation and economic empowerment.

Although personal technology was seen overwhelmingly as a positive force in both developed and developing countries, there were concerns that focused on personal safety and security, family bonds, and, most significantly, privacy.

Interestingly, the survey found that the developing countries are more willing to trade privacy for security.

India, especially, sees national security as more important that privacy. On the other end of the spectrum, nearly 70 percent of the polled German users said that they shouldn’t have to trade privacy for national security (click on the screenshot to enlarge it): 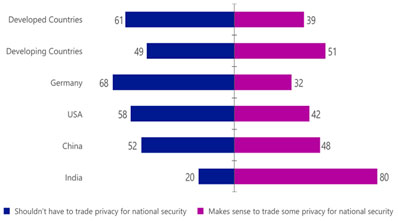 Despite privacy concerns, however, nearly three-quarters of parents around the world want their children to have more, not less, access to personal technology. This is particularly true in developing countries, where parents are especially supportive of increased access to technology.

Opinions are mixed in developed countries, where more parents feel there should be limits to technology access.

The Microsoft poll was conducted between Dec. 26, 2013, and Jan. 3, 2014, and surveyed 10,009 Internet users in the United States, France, Brazil, Russia, China, India, Japan, Germany, Mexico and Turkey. The results were then weighted based on the size of the Internet populations in each of the 10 countries.