Verizon security researchers have found that 92 percent of the 100,000 security incidents analyzed over the past ten years can be traced to nine basic attack patterns that vary from industry to industry. 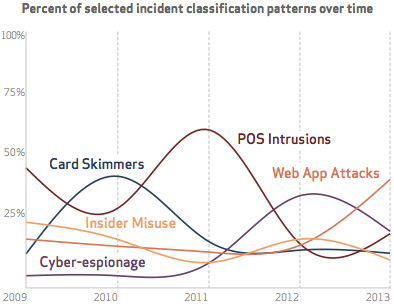 “After analyzing 10 years of data, we realize most organizations cannot keep up with cybercrime – and the bad guys are winning,” said Wade Baker, principal author of the Data Breach Investigations Report series. “But by applying big data analytics to security risk management, we can begin to bend the curve and combat cybercrime more effectively and strategically.

“Organizations need to realize no one is immune from a data breach. Compounding this issue is the fact that it is taking longer to identify compromises within an organization – often weeks or months, while penetrating an organization can take minutes or hours,” Baker said.

This year’s report found that on average, just three threat patterns cover 72 percent of the security incidents in any industry. For example, in the financial services sector, 75 percent of the incidents come from Web application attacks, DDoS and card skimming, while 54 percent of all manufacturing attacks are attributed to cyberespionage and DDoS. In the retail sector, the majority of attacks are tied to DDoS (33 percent) followed by point-of-sale intrusions (31 percent).

Eric Chiu, President of HyTrust, said: “As we see in the report, everyone is vulnerable to some type of security incident, whether external attacks or insider misuse and errors that harm systems and expose data. The number one threat method was stolen user credentials. Also startling is the widening gap between the time to compromise and time to discover breaches. Both of these points underscore that breaches are happening more and more from the inside where attackers are using stolen credentials, and once on the network, are almost impossible to detect.”