Alphanumeric CAPTCHAs – those more or less difficult-to-read combinations that are used by many online services to discern whether a user is human or a bot – have been in use for over 15 years now, but I’ve yet to meet a person who likes “solving” them.

While the general consensus is that they serve a good purpose, researchers have tried to make their solving as pleasant as possible for users and, at the same time, as difficult as possible for computers.

He is the lead of Google’s anti-abuse efforts and has recently shared a few discoveries about CAPTCHA use that have spurred Google to prefer numeric CAPTCHAs when the chances – as calculated by the firm’s risk analysis system – that a user is human are high.

“The meaning of the word used in the CAPTCHA deeply influences both how people perceive its difficulty and how pleasant the task of answering it to be,” they discovered.

While actual words and pseudo-words are more easily and accurately solved than numeric CAPTCHAs and those consisting of random letters and random combinations of letters and numbers, words carry meaning.

“People are unconsciously biased by the meaning and the frequency of the words used in the CAPTCHA,” he explained. “For example, for our survey we chose the word pretty as an example of a high frequency positive word, and cutest as a low frequency positive word. Google search returned approximately 1.1 billion results for pretty and about 36 million results for cutest. We chose guilty as a high frequency negative word, and abject as a low frequency negative word. These words had 150 million and 4 million Google search results, respectively.”

The results of the survey have proven that users vastly prefer positive words to negative ones, and that the latter negatively impact user perception (and satisfaction). 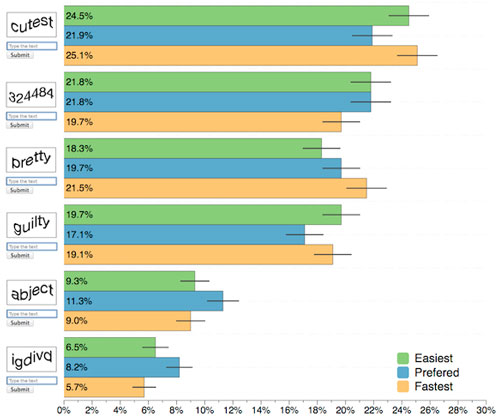 As it is impossible to generate hundreds of millions of captchas with consistent user sentiment, numeric CAPTCHAs are a better choice when dealing with humans.

Bursztein says the change was a success. “People are 6.7% more accurate at solving it compared to the old one,” he noted, and added that these new system has helped to reduce frustration. “People click 55% less on the reload button for the new CAPTCHA,” he says.