CYREN published its April 2014 Internet Threats Trend Report. Among its findings, they revealed a 73 percent increase in the number of phishing attacks aimed at PayPal users. 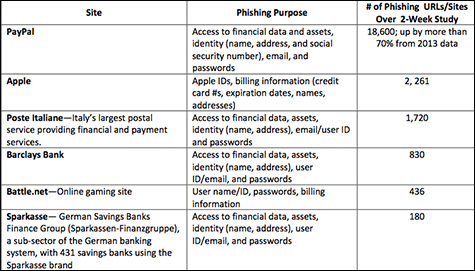 The upward trend illustrates the move by cybercriminals from less profitable spam to attacks that generate more revenue. PayPal remains the consistent favorite due to its wide acceptance across the internet and the ease with which funds can be transferred between accounts.

During a two-week sampling taken during the first quarter of this year, CYREN researchers found the number of PayPal related phishing URLs increased from approximately 750 a day in Q4 2013 to more than 1,300 a day in Q1 2014. That increase made it the most heavily used lure at more than 18,600 phishing URLs during the two-week sample period. Other top brands used to lure email recipients were Apple, Poste Italiane, Barclays Bank, Battle.net and Sparkasse.