As the soccer world cup in Brazil is coming close, the offering of soccer-related apps on the Google Play store is big, at least 125 different vuvuzela apps are available. AVAST warns of the fake soccer gaming apps Corner Kick World Cup 2014 and Free Kick Champion. Pretending to be soccer games, they do nothing but display advertisings to the user. Also the apps “Fifa 2014 Free – World Cup” and “Football World Cup 14” are in the grey zone, collecting data unrelated to the apps’ functionality.

On Google Play, Corner Kick World Cup 2014 is described as an “amazing free kick champion” gaming app. Once downloaded and installed, the app cannot be played because it displays nothing but a white screen, with ads popping up now and then.

“This is unfortunately a quite common and sneaky way for developers to make money. With applications like this, the only person who benefits from them are the developers who receive money for each click on the ads displayed in their app,” said Filip Chytry, anti-malware expert at AVAST.

The app’s developer, VinoSports, offers five gaming apps on Google Play, all of which have been blocked by AVAST and are detected as Android:FakeViSport.

Apps are in the grey zone
AVAST has found further soccer world cup gaming apps that are suspicious. Although they can be considered a game, they come with plenty of obstacles. It is nearly impossible to play Football World Cup 14 (Soccer), because ads constantly show up.

Fifa 2014 Free – World Cup requests access to information that has nothing to do with the app’s function, like location, call log, and to other accounts on the phone. The app’s developer, Top Game Kingdom, has many applications on the market, most of them behaving similarly. 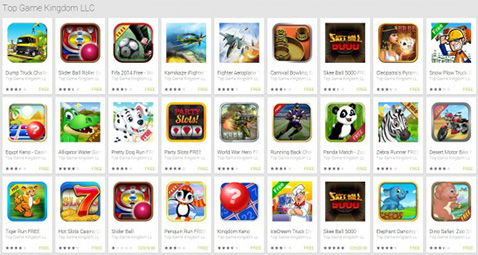 “We recommend you to take a closer look at the apps you download during tournament time, be it gaming apps, live streaming apps or apps that allow you to bet for your national team, to make sure you stay safe and as ad free as possible”, said Filip Chytry. “To make sure that you don’t get into the ad and spy trap play it safe and compare app functionalities to the access they request. Also, read user comments and rather download world cup-related apps from official providers like FIFA.”