Open Whisper Systems has released Flock, a private cloud service for securely and privately syncing contacts and calendars between multiple mobile Android devices, and is meant to replaces the sync services provided by Google. 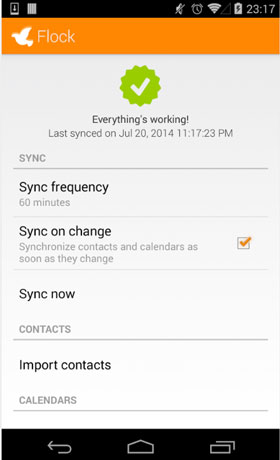 “Flock is mobile oriented, and integrates seamlessly with the Android account system. After registering, Flock exposes an Android account that transparently handles all the encrypted sync logic,” the developers explained. “Your data will be locked before ever leaving your device, and can only be unlocked by your password. We never see your password, and we can’t be compelled to hand over the keys to your data.”

“For the technically inclined, Flock also supports the ability to host your own sync server free of charge,” they added. Flock is compatible with any WebDAV server.

The service can be tried out free of charge for 30 days, and after that it will cost $5 a year. The developers are working on broadening it, and plan to offer encrypted backup of photos, videos, and desktop integration in the near future.