Many gamers either disable their security or remove it altogether, thereby sacrificing protection to maximize system performance and leaving themselves vulnerable to gaming-focused malware and cyber-attacks, according to a new study by Webroot. 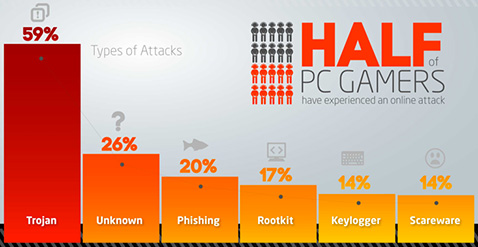 The new report is based on survey responses gathered from more than 1,200 gamers during the E3 2014 Conference. It concluded that while a third of gamers do not use a security program – citing gameplay, slowdown and too many alerts and interruptions as key factors – 47 percent have experienced a malware attack.

While running a gaming system without traditional antivirus security can improve gameplay performance, it exposes gamers to higher risk of security threats, including phishing attacks, malware and identity theft.

What can gamers do?

To protect against cybercriminals who are targeting gamers to gain access to their online gaming credentials, and other personal information that can be exploited for profit, Webroot recommends gamers:

Install a cloud-based anti-malware program. This next generation of PC security does not rely on local threat signatures so it provides dramatically superior system performance compared to traditional antivirus software.

Keep antivirus software up-to-date. The previously mentioned cloud-based anti-malware technology is one of the best ways to ensure protection is always current as it does not need threat signature updates.

Deploy anti-phishing detection. Online gaming credentials are frequently targeted by cybercriminals who can exploit the information for profit.