Sony’s PlayStation Network has been hit with and downed by a large DDoS attack this weekend, but is now back online a functioning as it should.

“Like other major networks around the world, the PlayStation Network and Sony Entertainment Network have been impacted by an attempt to overwhelm our network with artificially high traffic,” the company explained in a blog post on Sunday. “Although this has impacted your ability to access our network and enjoy our services, no personal information has been accessed.”

Initially, a group of hackers that calles itself Lizard Squad took responsibility for the attack, hinting that Microsoft’s Xbox Live network has also been attacked. They claimed that the attack was due to the fact that Sony isn’t spending money earned from PSN users to improve the service, and that the attack was a way to protest bombings aimed against ISIS.

Finally, they claimed that there was a bomb on board a commercial flight carrying Sony Online Entertainment President John Smedley to Dallas to San Diego. The flight was diverted to Phoenix and the FBI got involved and started an investigation.

In the meantime, another hacker – known on Twitter as Fame – claimed that he had performed the attack: 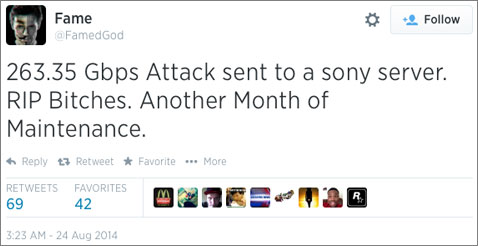 He posted proof that he was behind the attack and a video with the explanation of how he performed it. In addition to this, he posted the alleged IP addresses of the Lizard Squad’s members.

He claims to have performed the attack by leveraging vulnerable NTP servers – what’s left of them, anyway.

His motivation for the attack is apparently the same as that claimed initially by the Lizard Squad: he resents Sony’s lax security measures and greed.