The number of reported security incidents rose 48 percent this year to 42.8 million – which is the equivalent of 117,339 attacks per day. A report from PwC US, CIO and CSO magazines, also indicates that the compound annual growth rate (CAGR) of detected security incidents has increased 66 percent year over year since 2009. 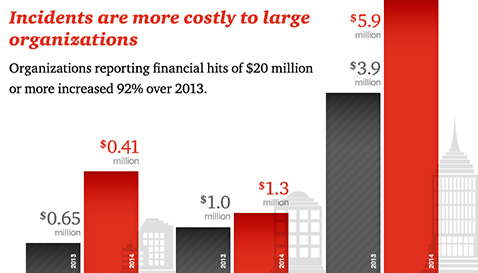 As security incidents grow in frequency, the associated costs of managing and mitigating breaches are also increasing. Globally, the estimated reported average financial loss from cybersecurity incidents was $2.7 million – a 34 percent increase over 2013.

Big losses have been more common this year as organizations reporting financial hits in excess of $20 million rose 92 percent. While risk has become universal, the survey found that financial losses also vary widely by organizational size.

Despite elevated concerns, the survey found that global information security budgets actually decreased four percent when compared with 2013. In fact, security spending as a percentage of IT budget has remained stalled at 4 percent or less for the past five years.

Insiders have become the most-cited culprits of cybercrime – but in many cases, they unwittingly compromise data through loss of mobile devices or targeted phishing schemes. Respondents said incidents caused by current employees increased 10 percent, while those attributed to current and former service providers, consultants and contractors rose 15 percent and 17 percent, respectively.

Effective security awareness requires top-down commitment and communication, a tactic that the survey finds is often lacking across organizations. Only 49 percent of respondents say their organization has a cross-organization team that regularly convenes to discuss, coordinate, and communicate information security issues.

PwC notes that it is critical for companies to focus on rapid detection of security intrusions and having an effective, timely response. Given today’s interconnected business ecosystem, it is just as important to establish policies and processes regarding third parties that interact with the business.