Occasionally, cyber crooks compromise websites administered by governments and make them host phishing pages. But how often does that happen?

Cyvveillance researchers have analyzed a year’s worth of phishing URLs they have collected – a little over 72,000 unique domain names – to find that answer, and have found that 195 distinct phishing attacks were hosted on government-administered servers.

Sites belonging to Brazilian and Chinese governments were most successfully targeted, followed by those administered by Colombian, Turkish, and Nepalese governments. 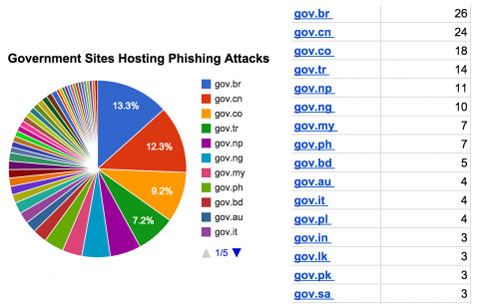 “The data suggest that countries whose economies are growing quickly may have a harder time securing their infrastructure online than more established economic powers,” the researchers noted.

“For example, with China’s breakneck pace of growth it should be no surprise that there are government servers stood up without optimal security in place. A hallmark of emerging markets is a lack of skilled or technical labor.”

They also pointed out that this type of attack is usually not perpetrated by state-sponsored attackers, but by common cyber crooks.