Tired of solving CAPTCHAs? Google has just the thing for you.

The company has introduced the latest iteration of its reCAPTCHA tool, and it most cases, it will allow users to push on to the wanted websites by simply ticking off the box that confirms that they are not a robot.

“How can this work?” you’ll ask yourself. Well, underneath the smooth surface, a new API is hard at work.

“Last year we developed an Advanced Risk Analysis backend for reCAPTCHA that actively considers a user’s entire engagement with the CAPTCHA—before, during, and after—to determine whether that user is a human,” explained Vinay Shet, Product Manager at Google’s reCAPTCHA.

The API is tracking things like IP addresses, cookies, the users’ mouse movements as they move to check the box, but also users other clues that Google will not reveal, as the knowledge would help botmasters found a way to defeat the system again.

For those worried about privacy, Shet confirmed for Wired that when users solve reCAPTCHAs on other sites, Google is only capable of tracking their movements over the widget and not on the rest of the page.

If the new reCAPTCHA can’t confidently tell that a user is human from that first interaction, he or she will again have to solve a CAPTCHA. Still, the majority of the won’t.

“Early adopters, like Snapchat, WordPress, Humble Bundle, and several others are already seeing great results with this new API. For example, in the last week, more than 60% of WordPress’ traffic and more than 80% of Humble Bundle’s traffic have encountered the No CAPTCHA experience—users got to these sites faster,” noted Shet.

Mobile users will be presented with a different kind of challenge – they will have to identify a series of photos that correspond to one shown: 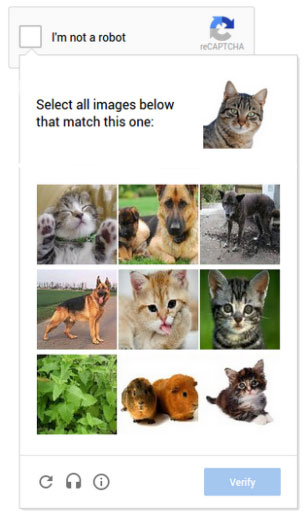 Apparently, this simplifies the process – tapping a few images is easier and faster than opening the virtual keyboard and typing in lines.