Swiss users are being heavily targeted by a number of spam campaigns delivering the Tiny Banker (TinBa or Busy) e-banking Trojan.

They masquerade as emails containing images sent from iPhones, an MMS sent to the user by Orange, and an application for a job position: 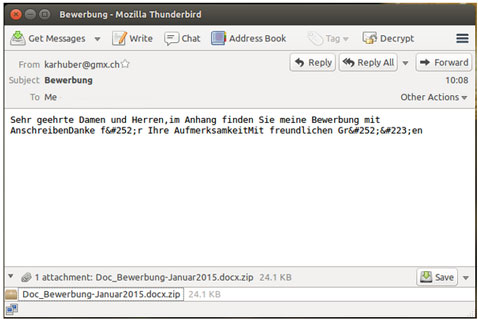 Unfortunately for those who fall for these tricks, the attached ZIP files contain only malware.

“While most of the Tinba versions I usually come across of are utilising a Domain Generation Algorithm (DGA) to calculate the current botnet C&C domain, the version of Tinba that has been spread in Switzerland since yesterday is using hard-coded botnet C&C domains,” noted Swiss security activist Raymond Hussy.

Further investigation revealed that all the sending IP addresses are Cutwail infected IPs, and the malware tries to contact four distinct C&C servers, two of which have already been sinkholed.

Hussy recommends to network administrators to block traffic to and from the remaining two active domains (serfanteg.ru, midnightadvantage.ru) and the following IPs: 91.220.131.216 and 91.220.131.61.

“In general, 91.220.131.0/24 looks quite suspect. So you may want to block the whole netblock,” he pointed out, adding that it would also be a good idea to block filenames with multiple file extentions on their email gateway.