Enterprises are not doing nearly enough to understand which mobile app behaviors hitting their networks and data are risky, nor are they testing apps for those risky behaviors to ensure proper enforcement of their BYOD policies, according to Flexera Software and IDC. 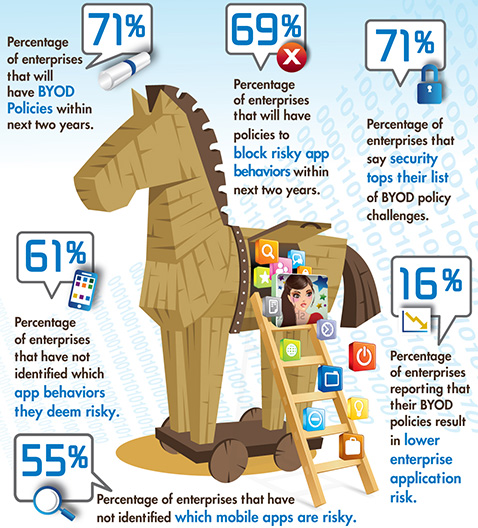 Despite data security being among the biggest challenges when implementing BYOD policies for enterprises (71 per cent), 61 percent have not even identified which app behaviors they deem risky – i.e. ability to access social media apps like Twitter, apps that report back user data to app producers, and such.

The report provides a sobering wake up call to businesses, underscoring that BYOD risk doesn’t just arise from malicious hackers and rogue nations. Threats to data and security are hidden, as in a Trojan horse, in the most innocuous-seeming apps that employees can unwittingly unleash on the enterprise, like a flashlight app that illegally transmits user data to advertisers, or common banking apps capable of capturing device logs, accessing contacts lists, reading SMS messages or even installing packages on the phone.

“BYOD policies are critical to organisations seeking to maximise the value and minimise the risks they encounter by integrating mobile devices and apps within their infrastructures, because these policies define the behaviours that are and are not acceptable,” said Robert Young, Research Manager, End Point Device & IT Service Management and Client Virtualisation Software, IDC. “But BYOD policies are inadequate if appropriate enforcement mechanisms are not put into place and followed.”