Experian Data Breach Resolution and the Ponemon Institute asked professionals to weigh in on several topics including who should be responsible for securing payment systems and how effective their organizations is in preparing for and responding to a payment card breach. 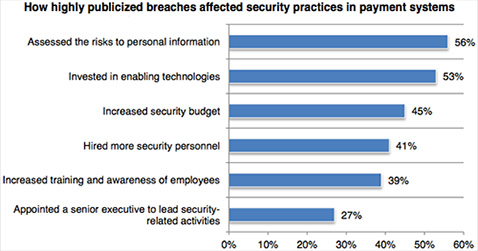 “The mega payment card breaches last year put cybersecurity front and center for corporate America and consumers,” said Michael Bruemmer, vice president, Experian Data Breach Resolution. “Companies in the payments industry face a huge challenge keeping up with securing new technologies to protect customer data and with cybercriminals who are trying to penetrate card systems 24-7. However, they are taking the right steps to shore up their defenses and prepare their incident response plan. Companies are concerned about the effect on consumers so it is encouraging to see a majority of respondents believe offering identity theft protection is a best practice in the event of a breach.”

Pressure to act is increasing:

While progress has been made, industry collaboration is lacking: