Yesterday, a joint international operation led to the dismantling of a group of cybercriminals active in Italy, Spain, Poland, the United Kingdom, Belgium and Georgia, who are suspected of committing financial fraud involving email account intrusions. 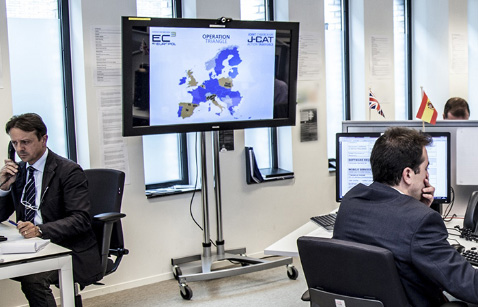 The modus operandi used by this criminal group is the so-called man-in-the-middle and involved repeated computer intrusions against medium and large European companies through hacking (malware) and social engineering techniques. Once access to companies’ corporate email accounts was secured, the offenders monitored communications to detect payment requests.

The company’s customers were then requested by the cybercriminals to send their payments to bank accounts controlled by the criminal group. These payments were immediately cashed out through different means. The suspects, mainly from Nigeria, Cameroon and Spain, transferred the illicit profits to outside the European Union through a sophisticated network of money laundering transactions.

To enable swift coordination and communication between the different officers involved in this transnational operation, a coordination centre was established at Europol’s headquarters in The Hague. Representatives from law enforcement agencies participating in the action day were present in the coordination centre, facilitating international information exchange along with Eurojust. At the same time, Europol specialists provided operational support on the ground in Italy and Spain, through the deployment of Europol mobile offices.
More about
Share this