83 percent believe game developers should be responsible for securing players’ personal data, however fewer than 40 percent said they feel confident in current safeguards, according to PlayFab.

Further, while 86 percent of participants expressed concern with protecting personal data on the Internet, data security ranked as one of the lowest priorities when making game purchases for nearly half of all respondents, indicating a disparity between beliefs and actions. 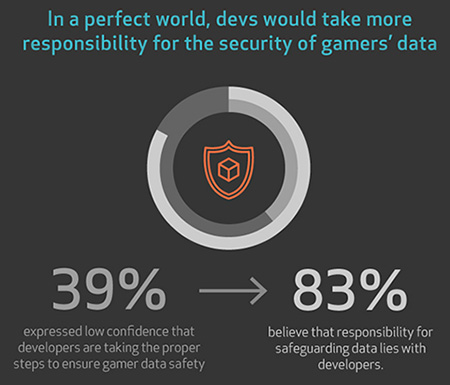 “These survey results underscore both the opportunity for game developers to improve trust by focusing on security measures, and the importance that they do so to safeguard an audience that relies on them,” according to James Gwertzman, CEO of PlayFab.

1. Most respondents indicated some level of effort to take personal data security into their own hands, with 46 percent saying they provide the bare minimum of personal data required and 20 percent indicating they will sometimes give false information when making game purchases.

3. When asked about the security of their game accounts and experiences, more than 80 percent ranked either personally identifiable or financial related information as the most important thing to protect, while system speed and performance rated as the least important by nearly 40 percent, and in-game data and achievements were rated least important by more than 20 percent.

4. Most respondents had minimal experience with compromised data – only 30 percent were aware of data breaches that had affected the games industry, and 85 percent had not experienced a game-related security breach; 71 percent indicated they had not ever discontinued use of a game due to security vulnerability concerns, further highlighting a lack of alertness to potential risks.

5. The majority of participants – 55 percent – either view desktop/laptop as safer than other platforms, or believe all platforms to be roughly equal in terms of security, which shows a disconnect from the reality of the landscape. 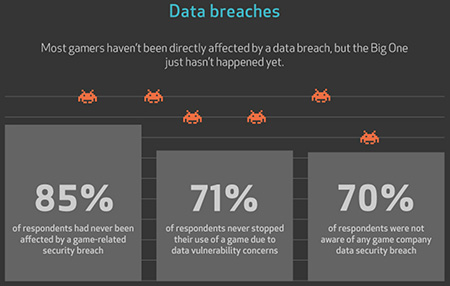 The study polled 500 U.S. residents who play games at least four hours per week. Among them, 44 percent of respondents who play on desktops/laptops indicated more than 10 hours per week spent playing games, and 37 percent of respondents who play on mobile devices indicated more than 10 hours weekly. Participants ranged in age from 18 – 60+ years. Approximately 46 percent were men and 54 percent were women. The survey was conducted by SurveyMonkey in August 2015.
More about
Share this