Faced with the infamous Windows Blue Screen of Death (BSOD), many unexperienced computer users’ first reaction is panic. If that screen contains a toll free number ostensibly manned by Microsoft technicians who are there to help users overcome this problem, many are probably tempted to pick up the phone.

It is this reaction that cyber crooks are counting on. But how to make this fake screen appear on the user’s computer?

According to Malwarebytes’ researcher Jerome Segura, the latest scheme of this kind was detected only days ago. The crooks have been using Google’s AdWords to make links to malicious pages appear at the top of the Google Search page when user searched for “youtube”.

Even though the ads seemed legit at first glance, they would lead users to the fake BSOD screen (click on the screenshot to enlarge it): 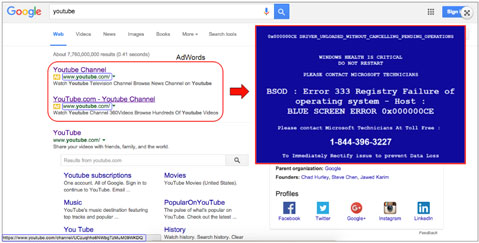 Users who fell for the scheme and called the toll-free “helpline” to resolve the issue were, unbeknownst to them, talking to the scammers, who tried to get them to pay between $199 to $599 for “support packages”. And, if they were particularly gullible, they were asked to share personal and bank account information.

“The BSOD is a popular theme as of late and an effective way to display bogus but legitimate error codes that would trouble many internet users,” says Segura, and points out that “the best defense against tech support scams (in all their forms) is awareness.”