“ESET unveiled fake apps available at the official Google app store. Posing as popular game cheats, such as Cheats for Pou, Guide for SubWay and Cheats for SubWay, these fake apps were installed more than 200,000 times in a single month, according to ESET security researchers. 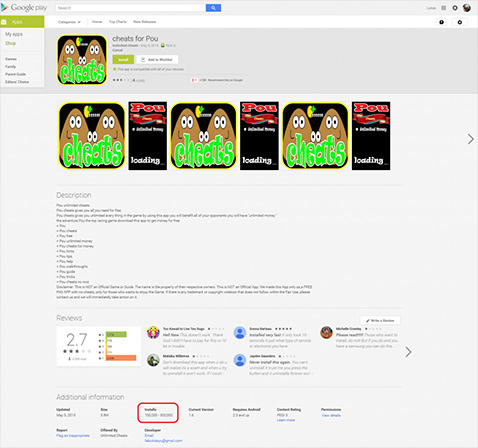 These aggressive ad-displaying apps attempt to hide their functionality from security researchers by deploying techniques, which succeeded in being downloaded over 200,000 times in a single month, said Lukas Stefanko, Malware Researcher at ESET.

The anti-Bouncer technique used by these apps obtains the IP address of a device and accesses its WHOIS record. If the information returned contains the string Google, then the app assumes it is running in Bouncer. Should the app detect an emulator or Google Bouncer environment, the ads are not displayed. Instead, the app will simply provide game cheats, as expected.

ESET notified Google and these unwanted applications have now been removed from the Google store.

Although its good that Google removed the apps from the Android Google Play store after we informed them of the issue, it is clear that more attempts will be made to bypass Bouncer and spread apps containing undesirable code, concluded Stefanko.”