Secunia Research revealed the state of security for PC users in a total of 14 countries, including the US. One in 20 applications on private US PCs are end-of-life and 12 percent of Windows operating systems are unpatched. 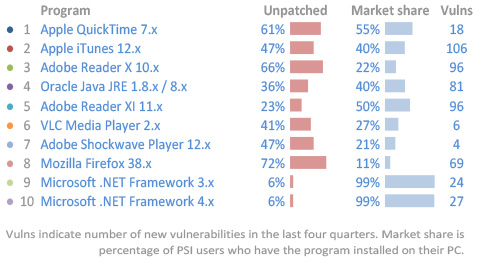 Key findings in the US include:

“Hackers benefit from users’ failure to uninstall end-of-life applications, as the exploits they wrote for the old versions continue to work and continue to have value on the black market,” said Kasper Lindgaard, Director of Secunia Research at Flexera Software. “Too many users install and forget. Maintenance of software is not high on the radar of the average computer users, who tend to install whatever application they need to support whatever they need to do. They then tend to leave it sitting in their system, forgetting to uninstall or update it,” said Lindgaard.

Oracle Java drops down to number four as a result of two factors: