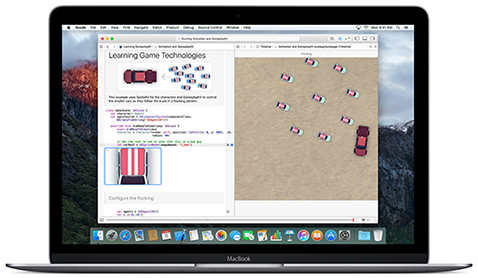 Swift is easy to learn and use, even if you’ve never coded before, and it’s the first systems programming language that is as expressive and enjoyable as a scripting language. Designed for safety, Swift also eliminates entire categories of common programming errors.

“By making Swift open source the entire developer community can contribute to the programming language and help bring it to even more platforms,” said Craig Federighi, Apple’s senior vice president of Software Engineering. “Swift’s power and ease of use will inspire a new generation to get into coding, and with today’s announcement they’ll be able to take their ideas anywhere, from mobile devices to the cloud.”

The Swift open source code is available via GitHub and includes support for all Apple software platforms — iOS, OS X, watchOS and tvOS — as well as for Linux. Components available include the Swift compiler, debugger, standard library, foundation libraries, package manager and REPL.

Swift is licensed under the Apache 2.0 open source license with a runtime library exception, enabling users to easily incorporate Swift into their own software and port the language to new platforms.
More about
Share this