In the latest test build of Windows 10 Anniversary Update released last week, Microsoft has introduced a tool that allows users to get rid of bloatware and crapware with one fell swoop.

“We’ve heard from many of you that are attempting to perform a clean installation of Windows that it can sometimes be hard to get started,” Dona Sarkar, a software engineer with the Windows and Devices Group, pointed out in the announcement.

“To help, we are providing a new tool that enables an easy and simple way to start fresh with a clean installation of Windows. This tool is now available from the Settings app for Windows Insiders using the latest builds that installs a clean copy of the most recent version of Windows10 and removes apps that were installed on your PC.”

It also offers the option of keeping personal files through the reinstallation or deleting them completely: 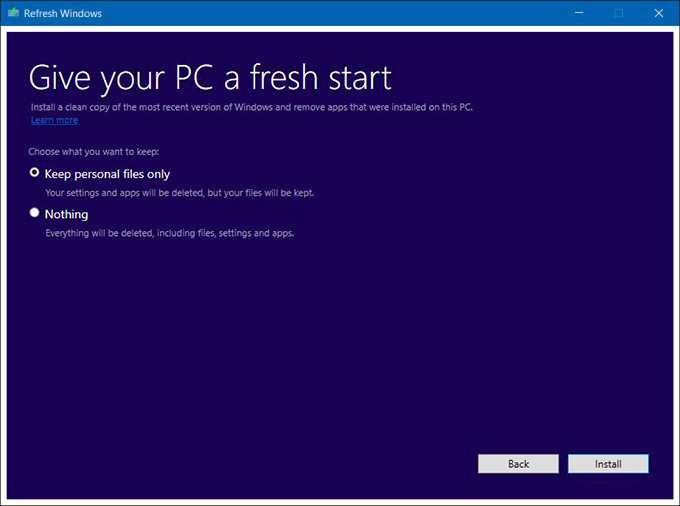 Once the PC is “clean,” users can install the applications they want – and only those they want. And they can get all the drivers that went missing during the clean-up via Settings > Update & security >Windows Update.

More details about the tool can be found here, including the instructions on how to use it. The utility was effectively released in May 2016 as a standalone tool, but is now bundled with the Windows test build.

For now, Microsoft does not recommends using the tool on a computer used for daily work.

“During this preview period, we cannot guarantee your digital licenses, digital content associated with applications, or other digital entitlements for applications will be carried through after using the tool, which may impact your ability to use paid-for apps or apps-related content. For this reason, we don’t recommend installing the preview on any PC where you wish to ensure all of your applications and application-related content (including Microsoft applications such as Office) remain properly installed and licensed,” they explained.

It’s also a good idea to back up any data you don’t want to loose before opting for the Windows refresh.

All of these problems are expected to be solved before Windows 10 Anniversary Update is released later this summer.