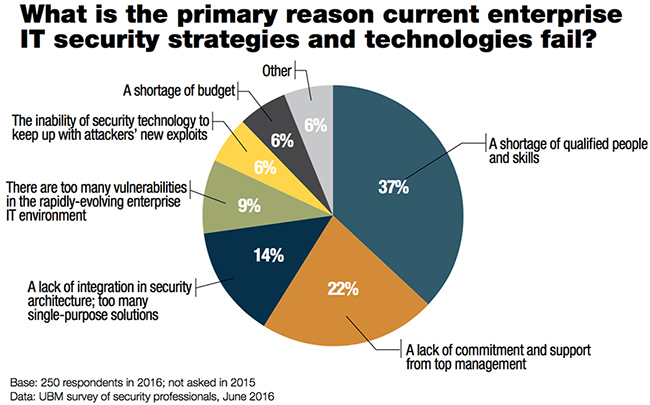 In 2015, Black Hat began compiling responses for a survey with the intent to gauge the attitude and plans of some of the most experienced and highly trained cybersecurity individuals – attendees of the Black Hat conference. In just a year, the event has recorded significant shifts towards an increased strain on the industry. The most notable trends can be divided into three categories spanning issues related to future threats, a decreasing workforce and neglected spending priorities.

Security professionals’ concerns associated with major breaches have only increased since last year. In 2015, 37 percent of respondents said it was either “highly likely” or that they “have no doubt” that they would face a major breach in the next 12 months; in 2016, that figure has risen to 40 percent.

Raising the need for concern, nearly 75 percent of security professionals say they do not have enough staff to defend their organizations against current threats. 63 percent directly relate this to a lack of budget.

There is no question that the shortage of skilled security professionals has become one of the most critical problems facing organizations today. 72 percent of organizations say they do not have enough staff to meet current threats. 37 percent say a shortage of qualified people and skills is the primary reason why security strategies and technologies continue to fail in today’s industry. Alarmingly, 67 percent of security pros say they, themselves do not have enough training to handle current threats. 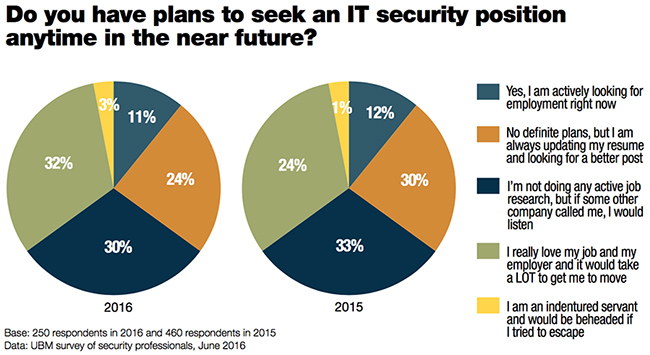 Even with the growing fear of future threats and lack of skilled professionals in the field, the gap between security professionals’ primary concerns and their dedicated expenditures is widening. Organizational priorities such as compliance and risk measurement consistently reduce the time/budget available for security professionals to resolve issues they consider the most critical. These pressing issues include targeted attacks, social engineering, and internal application security troubleshooting. Although the 2015 report revealed this trend, rather than a reverse in expenditure behavior, the issue has continued to increase.