Kaspersky Lab blocked 1,132,031 financial malware attacks on users, a rise of 15.6 percent compared to the previous quarter, according to the results of the company’s IT threat evolution report for Q2. One of the reasons for the rise appears to be the collaboration between the authors of two leading banking Trojans: Gozi Trojan and Nymaim Trojan, pushing both into the top 10 ranking of financial malware. 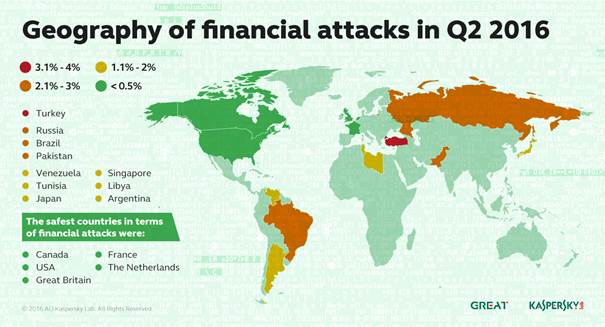 Banking Trojans remain the most dangerous online threats. These malware are often propagated via compromised or fraudulent websites and spam emails, and after infecting users, they mimic an official online banking page in an attempt to steal users’ personal information, such as bank account details, passwords or payment card information.

According to the Q2 report, Turkey was the country most often attacked by this type of malware: 3.45 percent of Kaspersky Lab product users in the country encountered this type of online threat during the quarter. Russia was in second place, the target of 2.9 percent of online threats, followed by Brazil with 2.6 percent; however, the Olympic Games are likely to push Brazil up the attack list in Q3.

The main culprits were the Gozi and Nymaim banking Trojans, with the authors of both joining forces. The Nymaim Trojan was initially designed as ransomware, blocking access to users’ valuable data and then demanding a ransom to unblock it. The latest version includes banking Trojan functionality from Gozi source code that provides attackers with remote access to victims’ PCs.

With the apparent joint effort regarding the distribution and cooperation of these malware, both Trojans were elevated into the top 10 list of financial malware.

“Financial malware are still active and developing rapidly,” said Denis Makrushin, security expert, Kaspersky Lab. “New banking Trojans have significantly extended their functionality by adding new modules, such as ransomware. If criminals do not succeed in stealing users’ personal data, they will encrypt it and demand a ransom. Yet another example is the Neurevt Trojan family. This malware was used not only to steal data in online banking systems, but also to send out spam. We at Kaspersky Lab are responding to this situation by expanding and sharpening the way we detect and classify financial malware – so that we can block it even faster.”