Open Whisper Systems’ Signal, the messaging app favoured by Edward Snowden and many other users who want and need to keep their communication safe and private, is now also offering the option of making messages disappear after recipients have had enough time to read them. 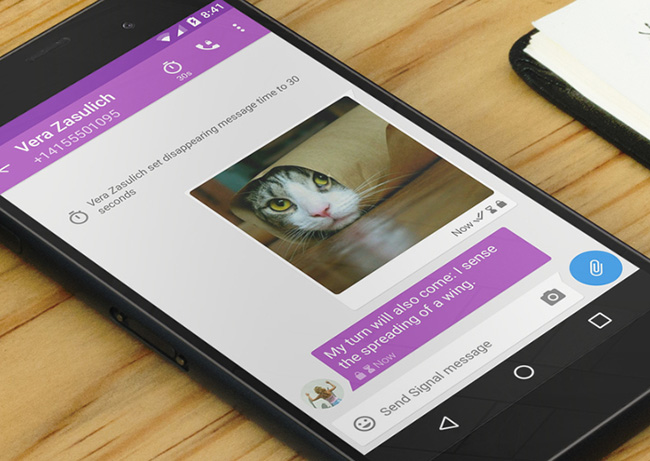 The messages can be set to disappear after a specific time period, which can range from a few seconds to a whole week.

Moxie Marlinspike – one of the authors of the Signal cryptographic protocol on which the app is based and the founder of Open Whisper Systems – made sure to note that the option is not meant to protect you from the message recipient keeping a copy it. After all, he or she can easily take a screenshot of it or take a photo of it with another device.

Instead, it’s a way to “automate minimalist data hygiene”, leaving users with a clean message log without any special effort.

Facebook also recently added the option of self-deleting messages to its Messenger app, along with the possibility to turn on end-to-end encryption.

Facebook Messenger’s Secret Conversations feature is based on the Open Whisper Systems’ open source, forward secure Signal protocol, and so is Google Allo’s incognito mode and WhatsApp’s (on by default) end-to-end encryption scheme.

Open Whisper Systems has recently revealed that it had received a subpoena that required them to provide information about two Signal users for a federal grand jury investigation, and that they complied by sharing the date and time they registered with Signal and the last date of their connectivity to the Signal service – the only two pieces of information the company logs about its users.

“Notably, things we don’t have stored include anything about a user’s contacts (such as the contacts themselves, a hash of the contacts, any other derivative contact information), anything about a user’s groups (such as how many groups a user is in, which groups a user is in, the membership lists of a user’s groups), or any records of who a user has been communicating with,” they explained.

“All message contents are end to end encrypted, so we don’t have that information either.”