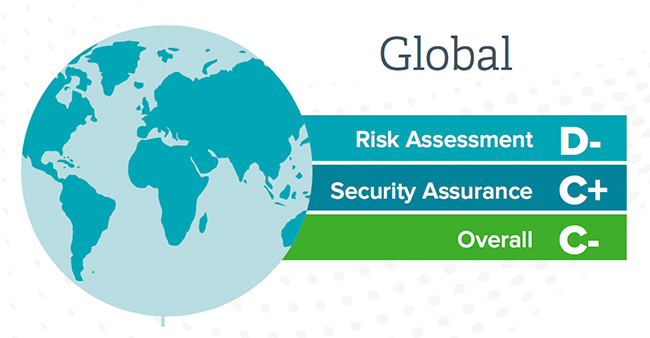 According to this year’s data, global cybersecurity confidence fell six points over 2016 to earn an overall score of 70 percent — a “C-” on the report card.

The overall decline in confidence is the result of a 12-point drop in the 2017 Risk Assessment Index, which measured the ability of respondents to assess cyber risk across 11 key components of the enterprise IT landscape.

“Today’s network is constantly changing — mobile devices, cloud, IoT, web apps, containers, virtual machines — and the data indicate that a lot of organizations lack the visibility they need to feel confident in their security posture,” said Cris Thomas, strategist, Tenable Network Security. “It’s pretty clear that newer technologies like DevOps and containers contributed to driving the overall score down, but the real story isn’t just one or two things that need improvement, it’s that everything needs improvement.”

Cloud darkening – Cloud software as a service (SaaS) and infrastructure as a service (IaaS) were two of the lowest scoring Risk Assessment areas in the 2016 report. SaaS and IaaS were combined with platform as a service (PaaS) for the 2017 survey and the new “cloud environments” component scored 60 percent (D-), a seven point drop compared to last year’s average for IaaS and SaaS.

A mobile morass – Identified alongside IaaS and SaaS in last year’s report as one of the biggest enterprise security weaknesses, Risk Assessment for mobile devices dropped eight points from 65 percent (D) to 57 percent (F).

DevOps is transforming the way software teams collaborate through increased consistency and automation, but it also introduces new security concerns. In fact, respondents reported just 57 percent confidence in the ability to assess security during the DevOps process.

At the same time, adoption of containerization technologies like Docker is exploding as organizations look to accelerate innovation cycles and reduce time-to-market. Unfortunately, only 52 percent of respondents felt that their organization had a handle on how best to assess risks within container environments. 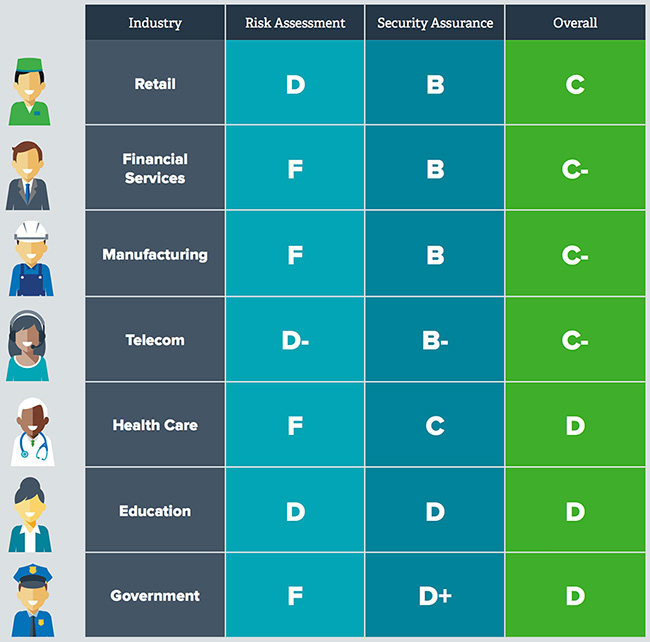 In the 2017 report, not surprisingly, the U.S. grade dropped from a B- in 2016 to a C+, indicating less confidence when it comes to cybersecurity assurance. Although the overall score in the U.S. dropped by two points, it is still well above the 70 percent global average. The U.S. scored second highest in risk assessment and security assurance, behind India.

When it comes to security assurance in the U.S., the highest grades achieved were for measuring security effectiveness (A-) and conveying risks to executives and the board (B+). However, the U.S. showed poor performance when it comes to being able to assess the risk of newer technologies such as containerization platforms (F), and DevOps (D) and IT security pros admit they still don’t have a handle on managing the risks associated with mobile devices (D).