Global organizations are more confident than ever that they can predict and resist a sophisticated cyber attack, but are falling short of investments and plans to recover from a breach in today’s expanding threat landscape, according to EY. 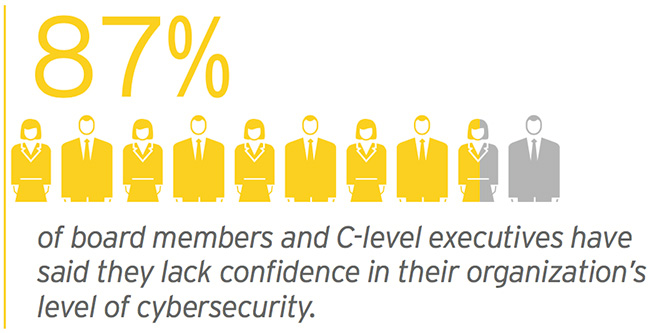 Now in its 19th year, a survey of 1,735 organizations globally examines some of the most compelling cybersecurity issues facing businesses today in the digital ecosystem. Findings showed that half of those surveyed said they could detect a sophisticated cyber attack – the highest level of confidence since 2013 – due to investments in cyber threat intelligence to predict what they can expect from an attack, continuous monitoring mechanisms, security operations centers (SOCs) and active defense mechanisms.

However, despite these investments, 86% of those surveyed say their cybersecurity function does not fully meet their organization’s needs.

When asked about recent significant cybersecurity incidents, 57% of respondents said they had an incident. 48% cited outdated information security controls or architecture as their highest vulnerability – an increase from 34% in the 2015 survey.

“Organizations have come a long way in preparing for a cyber breach, but as fast as they improve, cyber attackers come up with new tricks. Organizations therefore need to sharpen their senses and upgrade their resistance to attacks. They also need to think beyond just protection and security to ‘cyber resilience’ – an organization-wide response that helps them prepare for and fully address these inevitable cybersecurity incidents. In the event of an attack they need to have a plan and be prepared to repair the damage quickly and get the organization back on its feet. If not, they put their customers, employees, vendors and ultimately their own future, at risk,” said Paul van Kessel, EY Global Advisory Cybersecurity Leader.

Business continuity and disaster recovery – which is at the heart of an organization’s ability to react to an attack – was rated by respondents as their top priority (57%), along with data leakage and data loss prevention (57%). Although 42% plan to spend more this year on data leakage and loss prevention, only 39% plan to spend more on business continuity and disaster recovery.

This year’s survey also shows that respondents continue to cite the same key areas of concern for their cybersecurity, such as the increased risks from the actions of careless or unaware employees (55% compared with 44% in 2015) and unauthorized access to data (54% compared with 32% in 2015).

Meanwhile obstacles to their information security function are virtually unchanged from last year, including:

In the event of an attack that definitely compromised data, 48% of the respondents would not notify customers who had been impacted within the first week. Overall, 42% of respondents do not have an agreed communications strategy or plan in place in the event of a significant attack.

When it comes to devices, organizations are struggling with the number of devices that are continuously being added to their digital ecosystem. 73% of organizations surveyed are concerned about poor user awareness and behavior around mobile devices, such as laptops, tablets and smartphones. Half cited the loss of a smart device as a top risk associated with the growing use of mobile devices because they encompass both information and identity loss.