More than three-quarters of U.S. citizens (79 percent) are concerned about the privacy and security of their personal digital data, and 63 percent say they would feel more confident if the government agencies and service providers with which they interact had stronger data-privacy and security policies, according to an Accenture survey of nearly 3,500 U.S. citizens. 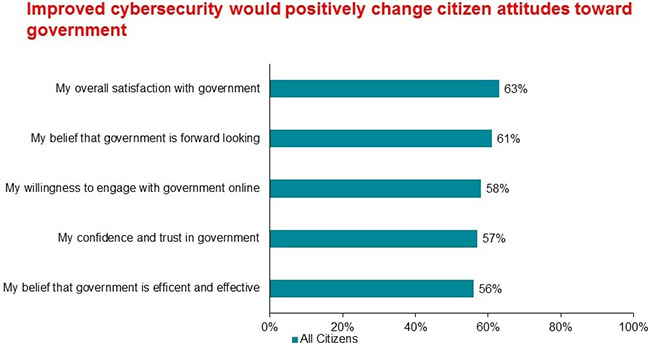 The survey – in which nearly one-third of respondents said they had been a victim of cybercrime – found that 74 percent of citizens lack confidence in government’s ability to keep their data private and secure, and 65 percent lack confidence in the ability of law-enforcement agencies to investigate and prosecute cybercrimes.

This survey confirms that ‘cyber insecurity’ is pervasive, with citizens feeling concerned and vulnerable,” said Lalit Ahluwalia, who leads Accenture’s security work with state and local government clients in North America. “All organizations must make cybersecurity a top priority and move to deploy end-end cyber defense solutions to combat threats to data, and to ensure citizen confidence when engaging with government agencies.”

The research also found that 66 percent of respondents said they would be willing to sacrifice convenience for increased data security. 60 percent support the improved security measure of answering additional login questions, and nearly half (47 percent) support the use of biometric technologies to verify identity and secure access.

The study identified cyber insecurity among citizens as being pervasive across all organizations with which they interact. Respondents did not perceive an increased threat related to government-held data, with 79 percent believing that their data is as secure or more secure with government as with commercial organizations.

When asked to identify the highest-perceived cyber-security threats, respondents most often cited identity theft (68 percent) and unauthorized access to financial accounts (64 percent), and more than half (55 percent) cited concern about credit-card-information theft.

Can the government protect your data?

The survey found that, despite citizen concerns about cyber threats, improved cybersecurity and data-protection measures could improve citizens’ attitudes toward government. 63 percent of respondents said that increased data-security measures would increase their satisfaction with government agencies, and more than half said that improved data-security measures would increase their willingness to interact with government agencies and their confidence and trust in those organizations (cited by 58 percent and 57 percent, respectively).

Peter Hutchinson, public service strategy lead at Accenture said, “While government agencies face many cybersecurity challenges, the research found strong citizen support for government organizations to take steps to increase data security and protect citizen information. Government agencies that take a comprehensive end-to-end security approach by integrating cyber security deep into their organizations will not only secure their data, but also win the trust and confidence of the citizens they serve.”

Interestingly, respondents who interact with government regularly (daily or multiple times per day) were more than twice as likely as those who don’t to express confidence in government’s ability to protect their data (64 percent versus 27 percent) and significantly more confident in the ability of law enforcement to prosecute cybercrime (67 percent versus 36 percent). In terms of age, millennials – those between the ages of 18 and 35 – were the most likely to express confidence in the government’s data-protection abilities, at 35 percent, and senior citizens (those 65 years and older) the least likely, at 16 percent.