Independent security researcher Dawid Golunski has released a proof-of-concept exploit code for an unauthenticated remote code execution vulnerability in WordPress 4.6 (CVE-2016-10033), and information about an unauthorized password reset zero-day vulnerability (CVE-2017-8295) in the latest version of the popular CMS.

The vulnerability exists in the PHPMailer library, and can be exploited by unauthenticated remote attackers to gain access to and compromise an target application server on which a vulnerable WordPress Core version is installed (in its default configuration).

“No plugins or non-standard settings are required to exploit the vulnerability,” Golunski noted.

A video demonstration of the exploit has also been released:

The hole has been responsibly disclosed to the WordPress Foundation, and has been plugged in January, with the release of WordPress 4.7.1.

Still, according to the Foundation’s own numbers, nearly 11 percent of all WordPress installation out there are still stuck on the vulnerable version 4.6.

And, as Golunski noted, it’s possible that older WordPress versions are also affected by the same flaw, so the percentage of vulnerable installations could be considerably higher: 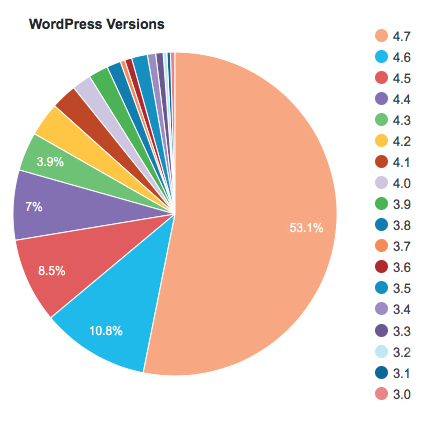 Admins who still run these older versions of the popular CMS should upgrade to newer versions, ideally to the latest one (v4.7.4).

Still, even that might not be a guarantee against compromise, as Golunski has also publicly released information and POC code for an unauthorized password reset vulnerability (CVE-2017-8295) that the WordPress Foundation is yet to patch.

According to him and BeyondSecurity, whose SecuriTeam coordinated the disclosure of the flaw to the WordPress developers, the discovery of the vulnerability dates back to mid-2016. Golunski found it in version 4.3.1 of the CMS.

“WordPress has a password reset feature that contains a vulnerability which might in some cases allow attackers to get hold of the password reset link without previous authentication. Such attack could lead to an attacker gaining unauthorized access to a victim’s WordPress account,” BeyondSecurity explained.

“The vulnerability stems from WordPress using untrusted data by default when creating a password reset e-mail that is supposed to be delivered only to the e-mail associated with the owner’s account.”

Golunski says that the issue was reported to the WordPress security team multiple times, but they did not confirm whether it has been patched.

He ultimately decided to publish his findings, and offer a temporary solution (“users can enable UseCanonicalName to enforce static SERVER_NAME value”).