A prototype quantum processor repeatedly beat a traditional, classical processor in a race to solve a puzzle, figuring out a secret combination up to 100 times faster by using exotic physics to sort through data that was deliberately packed with errors. 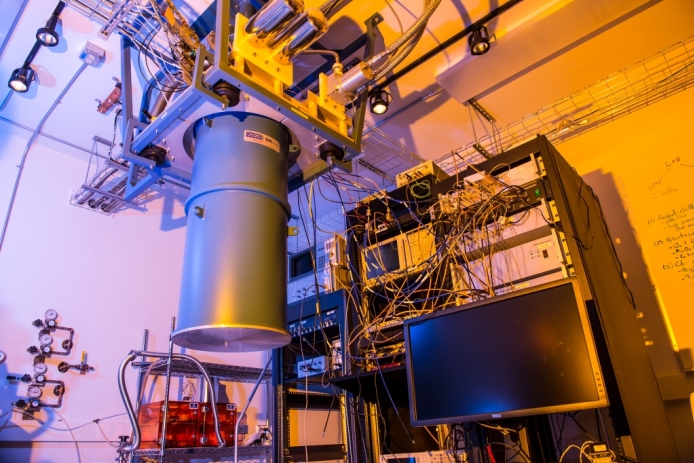 The quantum processor at Raytheon BBN Technologies in Cambridge, Massachusetts

A step forward for quantum computing

The experiment, detailed in a new academic paper by scientists from Raytheon and IBM, marks a small but significant step forward for quantum computing – an emerging area of technology that could one day lead to things like advanced encryption technologies, complex new medicines and more accurate radars. Specifically, the team’s work challenges the notion quantum computers will never have more than a negligible advantage over classical machines.

“Despite all the excitement about quantum computing, there are still lingering doubts that what we’re after is on loose foundations,” said Blake Johnson, a co-author of the paper, “Demonstration of quantum advantage in machine learning,” published in the April 2017 issue of the journal Nature Quantum Information. “We’re really on the verge of putting the nail in the coffin of those doubts.”

Researchers say the findings are encouraging, but they caution that practical quantum computers are still years away. The processor chip used in the experiment has only five quantum bits, used to store data, compared to the millions of bits found on a typical computer chip. The combination it cracked had only four digits.

The experiment took place at Raytheon BBN Technologies in Cambridge, Massachusetts. Working amid a web of wires, dials and digital displays, the team programmed an ordinary desktop computer to generate a four-digit combination. They sent that data to a small quantum circuit that can also function as a classical processor.

At first, with plain, clean data, the race was a tie – a result the IBM researchers predicted in a previous paper. So the team made the problem harder, telling the desktop computer to confuse the processor by mixing errors into the information. As the data became dirtier, the quantum processor’s margin of victory increased.

The processor used a quantum phenomenon known as entanglement, which allowed it to see two pieces of data as identical twins; as long as it could see one piece, it knew everything about the other. The classical processor, by contrast, was far less tolerant of the distorted data; just one glitch would throw off the rest of its computations.

“It’s a very clear demonstration of a quantum processor outperforming a classical processor by a very large factor,” said Zac Dutton, who leads the quantum information processing group at Raytheon BBN Technologies. “It shows that quantum computing can actually work.”