A vulnerability in Azure AD Connect could be exploited by attackers to reset passwords and gain unauthorized access to on-premises AD privileged user accounts, Microsoft warned on Tuesday. 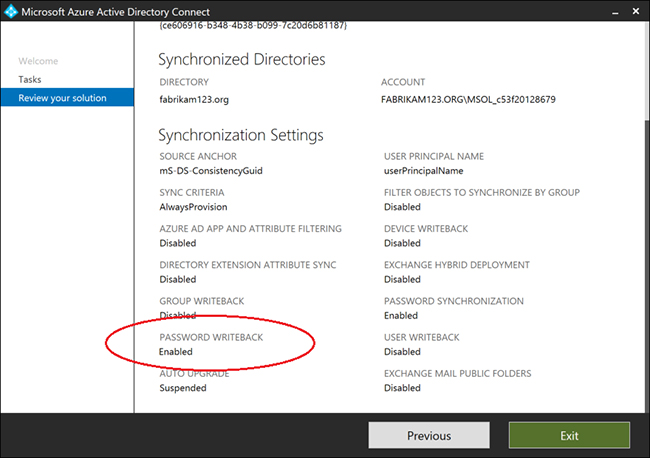 What are Azure AD and Azure AD Connect?

Microsoft Azure AD (Active Directory) is often used by enterprises to provide employees and business partners single sign-on access to cloud SaaS Applications (e.g. Office365, DropBox, etc.). It can also be integrated with an organization’s existing Windows Server Active Directory, so that they can use existing on-premises identity solutions to manage access to cloud based SaaS applications.

About the Azure AD Connect vulnerability

The privilege elevation bug can be exploited if the Azure AD Connect Password writeback, which provides a convenient cloud-based way for users to reset their on-premises passwords wherever they are, is misconfigured during enablement.

The hole has been plugged by Microsoft, and sysadmins just need to upgrade to the newest Azure AD Connect version: 1.1.553.0.

“The latest version of Azure AD Connect addresses this issue by blocking Password writeback request for on-premises AD privileged accounts unless the requesting Azure AD Administrator is the owner of the on-premises AD account,” Microsoft explained, and advices admins to upgrade to this version even if their organization isn’t currently affected by the flaw.

Those who, for whatever reason, can’t do so immediately, can implement one or more of several risk mitigation steps offered by Microsoft in the security advisory accompanying the release.

The document also contains instructions for admins to verify if their organization is affected.