Companies struggle to keep up with and respond to cyberattacks due to lack of resources, according to Demisto. For example, more than 40 percent of respondents said their organizations are not prepared to measure incident response, and only 14.5 percent of respondents are measuring MTTR (Mean Time to Respond). 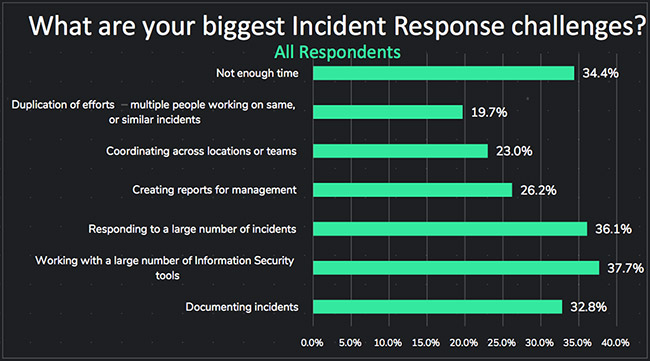 While organizations are hit with an average of nearly 350 incidents per week, 30 percent of respondents reported they have no playbooks, runbooks or other documentation for incident response actions.

The study also validated the known security staff shortage issues with new findings. More than 90 percent of the respondents indicated they are challenged finding experienced employees with the necessary skill sets. The study found it takes an average of 9 months from the initiation of a hiring requisition until the new hire is fully trained.

Since the need is frequently identified long before the hiring process begins, companies are without a resource – from the point where a need is identified until the point they have fully trained analysts – for almost a year. On the retention side, more than one-third of IR staff leaves within 3 years.

Key findings of the research