Criminal tactics used to access user credentials are growing in prevelance, and that a record 47 percent of all malware is new or zero day, and thus able to evade signature-based antivirus solutions, according to WatchGuard.

Mimikatz accounts for 36 percent of the top malware

A popular open source tool used for credential theft, Mimikatz made the top 10 malware varients list for the first time this quarter. Often used to steal and replace Windows credentials, Mimikatz surfaced with such frequency that it earned the top malware variant of Q2. This new addition to the familiar group of top malware varients shows that attackers are constantly adjusting tactics.

For several quarters, attackers have leveraged JavaScript code and downloaders to deliver malware in both web and email-based attacks. In Q2, attackers used JavaScript in HTML attachments to phishing emails that mimic login pages for popular legitimate sites like Google, Microsoft and others to trick users into willingly giving up their credentials.

Cyber criminals used an old Linux application vulnerability to target several Nordic countries and the Netherlands with attacks designed to steal password hash files. More than 75 percent of attacks leveraging a remote file inclusion vulnerability to access /etc/passwd were aimed at Norway (62.7 percent) and Finland (14.4 percent). With such a high volume of incoming attacks, users should update Linux servers and devices as a basic precaution. 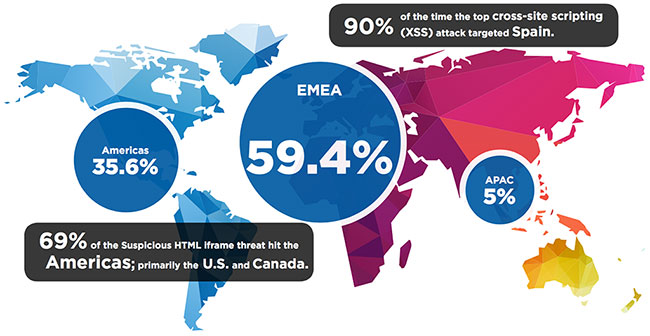 At 47 percent, more new or zero day malware is making it past legacy AV than ever before. The data shows that older, signature-based AV is increasingly unreliable when it comes to catching new threats, illustrating the need for behavioral detection solutions in order to catch advanced persistent threats.