Despite high profile cyberattacks continuing to occur, almost half of IT decision makers (ITDMs) at 250+ employee organizations around the world still believe that business executives are not making cybersecurity a significant enough priority or focus, according to Fortinet.

Many IT professionals believe that the transition to the cloud as part of their organizations’ digital transformation will in turn make security a growing priority.

Board members are not treating cybersecurity as a top priority

48% of IT decision makers believe that IT security is still not a top priority discussion for the board. This doesn’t seem to affect budgets since 61% of enterprises stated that they spend over 10% of their IT budget on security, which is a high investment.

71% of the surveyed respondents said their IT security budget has increased from the previous year. Now, IT decision makers feel strongly that cybersecurity should become a top management priority with 77% of the respondents saying that the board should actually put IT security under greater scrutiny. 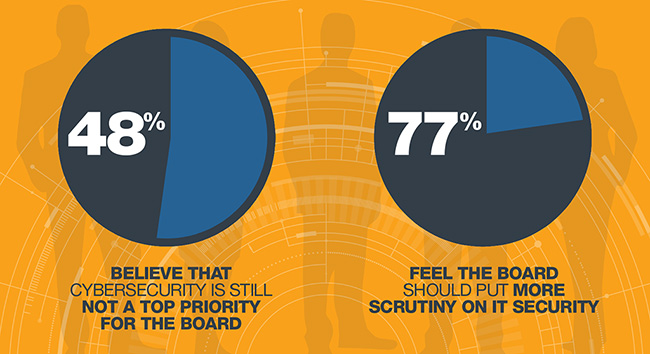 Increased pressure from the regulators: Another important driver of board awareness is the proliferation of regulation, 34% of respondents reported. With major fines threatening the bottom line, such as the impending GDPR compliance for European data, the board now has a mandate to take interest.