Reliability, security and quality of service all rank above cost when evaluating networking solutions providers. Spiceworks surveyed U.S.-based IT professionals who have influence on their organizations’ Ethernet, MPLS and SD-WAN purchase decisions. The survey gathered data around the challenges, benefits and drivers of utilizing these networking technologies.

What IT professionals think of Ethernet

Businesses appreciate Ethernet because it delivers higher bandwidth and capacity to better manage data growth and application performance, as well as enhanced security. The report found that a majority of respondents deploy Ethernet for either Carrier (60 percent) or Metro (46 percent) solutions.

When asked how their organization plans to utilize Ethernet in the future, respondents cited business-critical applications and workloads including email, database management, cloud-hosted services, big-data analytics and development/testing. While most current Ethernet solutions are used for local coverage, other connections – such as Point-to-Multipoint and Multipoint-to-Multipoint – are expected to increase.

What IT professionals think of MPLS

MPLS offers an advanced networking solution to businesses that want to create private WANs which deliver high performance, security and global reach over virtually any connection type, as well as improved bandwidth efficiency with routing and application prioritization. 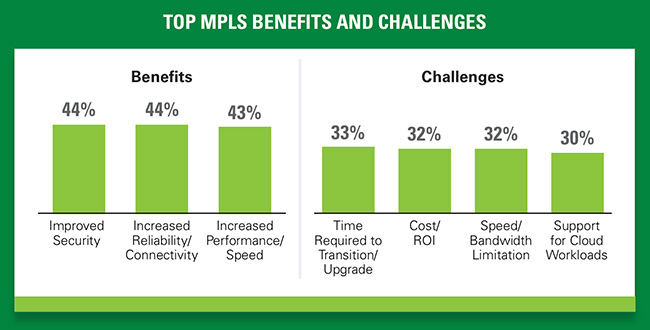 Respondents expressed confidence in MPLS’s reliability and performance: 55 percent noted they are currently deploying MPLS solutions and 45 percent say they are considering MPLS. Additional findings include:

What IT professionals think of SD-WAN

SD-WAN has become popular with geographically dispersed businesses such as retail and financial services because it enables administrators to better control network management with software, resulting in simplified deployment, centralized management and reduced costs. Key findings include: