F5 Networks announced the results of its 2018 State of Application Delivery report, which shows accelerating multi-cloud deployments are enabling organizations to select the cloud platform that best meets the requirements of a specific application. However, this also increases the challenges many companies face in managing operations and security across multiple clouds as they transform their application portfolio to compete in the digital economy.

“In this year’s report, respondents made clear they are heavily focused on building the foundation necessary for application driven digital transformation,” said Cindy Borovick, Business Intelligence Director at F5. “As a result, many are moving toward multi-cloud environments that will enable them to reinvent themselves as platforms for competitive differentiation and innovation, helping create business success in the digital economy.”

Optimizing IT infrastructure and processes remains the primary driver for digital transformation projects, according to 72 percent of respondents, while nearly half said digital transformation is encouraging the delivery of applications from the cloud (49 percent). Furthermore, 47 percent stated that it is changing how they develop applications, and 41 percent reported exploring new application architectures such as containers and microservices.

Multi-cloud enables the “best cloud for the app” strategy

Most organizations pursue a best-of-breed strategy for each application deployment, leading to multi-cloud architectures. Nearly nine in ten respondents reported using multiple clouds (87 percent), with 56 percent saying cloud decisions are made on a per application basis.

Application services are the gateways to the future 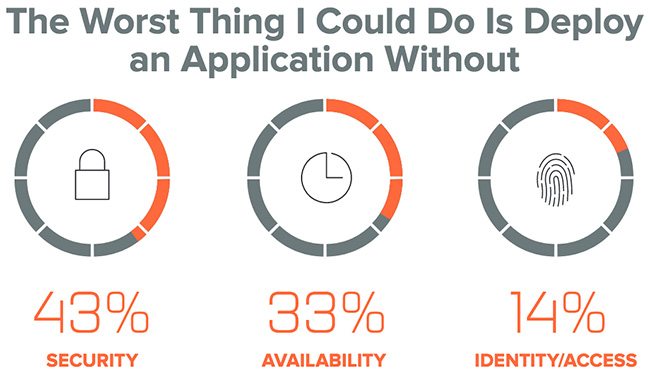 Digital transformation drives organizations to deliver more apps from the cloud, yet organizational confidence to withstand an attack has taken a hit due to lack of experience and expertise in securing applications deployed in public clouds. In fact, this year 28 percent said protecting applications is a top security challenge. This has led to an increase in organizations deploying Web Application Firewalls (WAFs), with 70 percent saying they have one deployed and another 19 percent planning to deploy in the next 12 months.