Both consumer and business applications are contributing to the growing dominance of cloud services over the Internet, according to the Cisco Global Cloud Index (2016-2021). For consumers, streaming video, social networking, and Internet search are among the most popular cloud applications. For business users, enterprise resource planning (ERP), collaboration, analytics, and other digital enterprise applications represent leading growth areas. 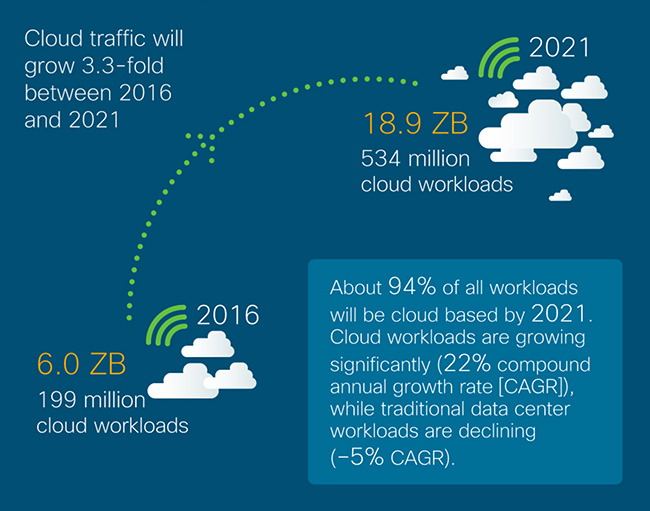 In the past, security concerns have been a major barrier to cloud adoption. Improvements in data center governance and data control have helped to minimize enterprise risk and better protect consumer information. Security innovations coupled with tangible cloud computing benefits, including scalability and economies of scale, play key roles in fueling the cloud growth projected in the study.

Additionally, the growth of Internet of Things (IoT) applications such as smart cars, smart cities, connected health and digital utilities requires scalable computing and storage solutions to accommodate new and expanding data center demands. By 2021, Cisco expects IoT connections to reach 13.7 billion, up from 5.8 billion in 2016.

2. Growth in stored data fueled by big data and IoT: 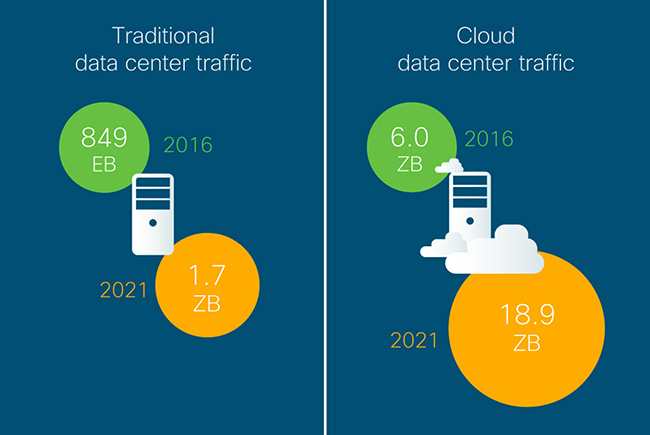 “To make the most of both the cloud and their existing legacy infrastructure, organisations should consider pursing a cloud native strategy. This enables businesses to use private and public cloud as appropriate, while enabling them to link new platforms to legacy platforms and data. Close collaboration between the C-suite and the IT team will enable businesses to design a balance that works for them in the long term. By unlocking the power in existing systems while facilitating innovation with new technologies, hybrid IT can enable even older companies draw on the power of what they have today – while moving quickly enough for tomorrow,” said Conway Kosi, SVP, Head of Managed Infrastructure Services, Fujitsu EMEIA.